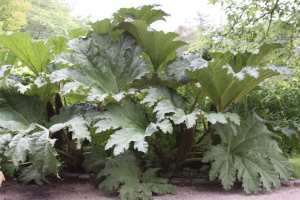 Gunnera is a truly ancient plant, having evolved some 150 million years ago, around the time of the dinosaurs. Named after Norwegian botanist Johan Ernst Gunnerus (who, by the way, described the basking shark and gave it its scientific name, Squalus maximus), Gunnera possesses glands that contain a cyanobacterium, Nostoc, which fixes nitrogen for the plant, meaning that Gunnera can live in what most plants would consider poor conditions. In fact, Gunnera is the only flowering plant in the world that has a symbiotic relationship with a cyanobacterium (all other nitrogen-fixing plant relationships are with the eukaryotic so-called “true” bacteria rather than prokaryotic cyanobacteria), making the plant of intense interest to molecular botanists. Gunnera is also of interest to indigenous peoples of the Chilean and Peruvian Andes; they eat the tender young stalks and leaves of the plant, called ‘nalcas’ in Spanish. 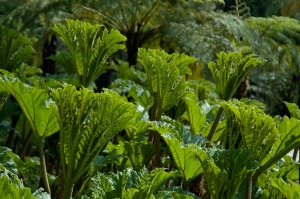 Native to southern Chile, Gunnera tinctoria was first brought to Ireland in 1939 as an ornamental plant. Its popularity as a garden plant grew quickly, and the plant did well since it was growing in a climate similar to its southern hemisphere home. However, despite the similarities of climatic conditions, it was growing in a community of completely different plants without its natural competitors and predators. It began to spread, and now Gunnera tinctoria is found on western Ireland’s coastal cliffs, waterways, roadsides, wet meadows and derelict gardens and fields. Propagating both by seed and by vegetative means, in early spring its leaves begin to grow and in just weeks can reach over 2 meters in height, shading all plants growing below its 2 meter wide leaves. Gunnera tinctoria is now a major threat to plant biodiversity in some areas of Ireland, because smaller plants cannot grow in the shadow created by the giant leaves. To fight the spread of this plant, Ireland is now applying herbicides to get rid of it. Bad news indeed. 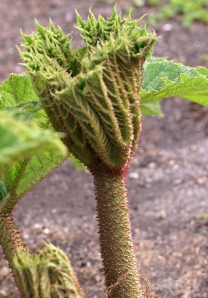 Law (2003) states that, “G. tinctoria is a large, clump-forming, herbaceous plant that grows up to 2m in height. It has stout horizontal rhizomes, and massive umbrella-sized leaves on sturdy petioles. The leaves and their stems are covered in rubbery prickles. Tiny green flowers occur in early summer on conical spikes.” The Taranaki Regional Council (2003) state that, “G. tinctoria is a perennial with an exotic tropical appearance with spiny stems some 1.5 to 2m tall. The flower stems resemble elongated broccoli and number up to five per plant, standing up to 1m tall and rising from the base of the leaves (each seed head may contain in excess of 80,000 seeds). In severe winter conditions the plant dies down for the winter and grows new leaves in spring.”

Plants for a Future (2000) reports that young leaf stalks can be peeled and cooked as a vegetable or eaten raw. They are “Acidic and refreshing”. G. tinctoria also has medicinal uses as an astringent. This species can also be used as to make a black dye is obtained from the root, and has been used as a roof covering Plants for a Future, 2000). Williams et al. (2005) reports that, “In Southern Chile (at latitudes of 36º-42ºS) G. tinctoria is a delicacy associated with Mapuche Indian customs. The young petioles are commonly sold by street vendors and eaten raw, along with salt and chilli to enhance the flavour (E. Villouta pers. comm. 2004).”

In nature, all Gunnera plants form a symbiosis with a nitrogen-fixing cyanobacteria, thought to be exclusively Nostoc punctiforme. The bacteria enter the plant via glands found at the base of each leaf stalk and initiate an intracellular symbiosis which is thought to provide the plant with fixed nitrogen in return for fixed carbon for the bacterium. This intracellular interaction is unique in flowering plants and may provide insights to allow the creation of novel symbioses between crop plants and cyanobacteria, allowing growth in areas lacking fixed nitrogen in the soil.
Source: tofinotime by Josie Osborne, Tofino – Wiki