The Giant Amazon Water Lily was discovered growing in the River Amazon in 1801, and first grown in Europe in the mid 19th Century. Known as the “Giant Water-Platter,” the structure of its exceptionally strong leaves inspired Sir Joseph Paxton to construct an immense conservatory at Chatsworth House, in which the lily flowered for the first time in Britain. The leaves of the Brazilian species, Victoria amazonica, reach six feet across and can support the weight of a well-balanced adult.

Victoria amazonica is in the Plantae kingdom. The flower itself is white and only blooms at night. The colour of the lily changes however when it is pollinated to a pinky purple. When the lily is still white in colour and needs to be pollinated it gives off butterscotch and pineapple scent that attracts the beetles that pollinate the flower; another way the flower attracts beetles is its power to heat up the core of the flower. If the heat outside is 85°C then inside the flower can be up to 95°C! The flower is approximately the size of a soccer ball and only lives for three days. It is not mentioned anywhere that the Victoria amazonica is an endangered species. Therefore it is most likely that it is a common species. These Giant Water Lilies were also brought from their natural habitats to laboratories in England, where researchers are trying to discover more about this particular species and are trying to hybridize these lilies to make different cultivars of the flower. 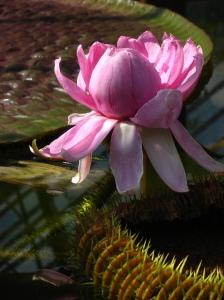 The most interesting thing about this flower is the large leaves that it creates. The Giant Water Lily adapts to the environment by growing thorns on the bottom of the leaves to protect itself from fishes and other predator that might want to eat it. Another adaptation is the rim around the edges of the leaves. These rims help protect the leaf from birds and insects that might want to eat the leaves (the rim is a barrier between the insects and the leaf). The third adaptation of this Giant Water Lily is that the flower only lives for three days, it traps the beetles that come to pollinate the flower inside its core and then releases all its pollen on these beetles. This enlarges the percentage of pollen that gets transported to other flowers for pollination. The bottom of the leaf is maroon in colour. The Giant Water Lily does not grow year round in areas where it is not a native species, such as Great Britain; it only grows and reproduces in the summertime when the climate is warm. However, in its native Brazil and in the Amazon it grows all year long, due to the optimum conditions.

There are two sides to the Giant Water Lily’s effect on the ecosystem. The negative part being that no other plant species can live under the Giant Water Lily due to it’s size. The water lily’s leaves are massive in size and they cover most of the surface of the water. This means that no sunlight can reach the rest of the water. Therefore no algae can grow, and with no food source, animals that feed on algae cannot exist. On the other hand, Giant Water Lilies are very helpful to some species, for example the Lily Trotter. The Lily Trotters walk on the leaves and obtain their food source (insects) from the water lily.

Victoria regia, as it was named, was once the subject of rivalry between Victorian gardeners in England. Always on the look out for a spectacular new species with which to impress their peers, Victorian “Gardeners” such as the Duke of Devonshire, and the Duke of Northumberland started a well-mannered competition to become the first to cultivate and bring to flower this enormous lily. In the end, the two aforementioned Dukes became the first to achieve this, Joseph Paxton (for the Duke of Devonshire) being the first in November 1849 by replicating the lily’s warm swampy habitat (not easy in winter in England with only coal-fired boilers for heating), and a “Mr Ivison” the second and more constantly successful (for Northumberland) at Syon House.

The species captured the imagination of the public, and was the subject of several dedicated monographs. The botanical illustrations of cultivated specimens in Fitch and W.J. Hooker’s 1851 work Victoria Regia received critical acclaim in the Athenaeum, “they are accurate, and they are beautiful”.The Duke of Devonshire presented Queen Victoria with one of the first of these flowers, and named it in her honour. The lily, with ribbed undersurface and leaves veining “like transverse girders and supports”, was Paxton’s inspiration for The Crystal Palace, a building four times the size of St. Peter’s in Rome.

Brazilian Legend about the Lily pad
Legend has it that, a long time ago, the Tupis-Guaranis, indigenous people from Northern Brazil, told that every night that moon hid behind the hills far off on the horizon. They used to say that, if the moon could like one single girl, it would transform her into a star of the sky. One princess, Pajé’s daughter (Pajé being a significant figure of the indigenous people), was impressed with that story. So, at night, when everybody was sleeping and the moon was traveling across the sky, the princess wanted to be a star, so she walked up to the hills and chased the moon, hoping the moon could see her up in the hills. And so she did, every night, for a very long time. But the moon did not seem to notice her, even though the crying of the princess could be heard in the distance as well as her sadness and sighs.

One night, the princess saw, in the clear waters of a lake, the image of the moon. The innocent girl wondered if the moon had come down to take her away, so she jumped in the deep waters to join the moon and its lovely young ladies. She was never seen again. The moon, in return for the beautiful princess’s sacrifice, transformed her into a different star, different from the all the others whose light lit up the night sky. So, the moon transformed the princess into a “Star of the Waters”, whose flower is the “Vitória Régia”. At that moment, a new plant was born, whose scented white flowers blossom and unfurl only at night. And, when the sun appears in the early morning, the flowers change their color to soft pink.
Source: livingrainforest.org