The Uruguayan Carnival is the longest Carnival in the world with celebrations lasting an entire month, and is considered the annual national festival of the nation. While the Carnaval extends to the entire country with important events in several cities of the interior, the main activities are made in the capital of Montevideo. As from 1750, a countless amount of slaves coming from Africa began arriving in the City of Montevideo. Even though they all had been born on the same continent, they belonged to very different ethnic groups. Most of them came from various parts of Africa, namely the East, the equatorial area and the Bantu tribes, but other zones of Western Africa also experienced the loss of their best youths and warriors. 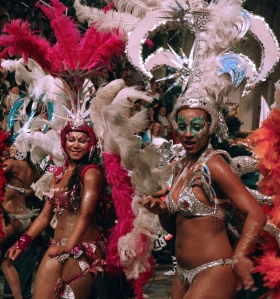 In those days, millions of colored men became part of the collection of slaves and servants owned by the well-off families, both in the City of Montevideo and in neighboring Buenos Aires (Argentina) All the hard labor in America was done by the slaves. Not only were these men humiliated for centuries, but they also lacked an identity of their own on the new continent.

It was Carnival which helped them resist. Every now and then, the slaves would remember the old African drums they used to perform their hunting, social or religious rites. Thus, what today has come to be called candombe began. It is a drum-based rhythm and dance created by these ethnic groups who arrived in the lands of the Río de la Plata on Spanish and English ships. Before the abolition of slavery, with the permission of their masters, these men and women would gather in the houses located in the oldest part of Montevideo and get in touch with their origins. When freedom arrived, they began to get together in the poorest neighborhoods in town, such as Sur and Palermo, where the ancient Llamadas (calls) were already being held. The presence of the lubolos in the Llamadas was the best idea the white men had in order to apologize in public for such savagery and genocide. The lubolos are white men disguised as black men in order to feel Carnival just like they do. 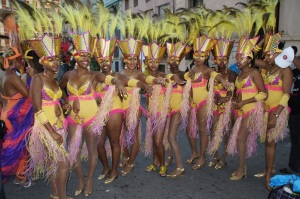 Uruguay attaches a lot of importance to carnival and the origins are European and African. During carnival in the times of the Spanish colony, African slaves covered themselves with robes of vivid colors and walked through the streets toward the city walls of Montevideo, where they were allowed to sing and dance. The “Candombe” is derived from African rhythms performed by the Negro slaves of the colony. Before President Joaquin Suarez abolished slavery on 1846 it was a common practice for Uruguayan households to employ African slaves for menial work. An estimate of ten million Africans reached the American continent’s harbours but it is believed that only one in six survived the trip. On 1750 the first African slaves arrived to Montevideo, eventually half the population of the country would be of African descent though they now number in the thousands.

The African population was varied, 71% came from the Bantu area: Eastern and Equatorial Africa and the rest from Western Africa. Candombe is what little survives of the culture brought by the African slaves after the suppression of the Spanish. As an escape, the slaves would gather clandestinely and dance accompanied by drums made out of barrels called tangós. By extension the word tangó defined the dance and the place where they gathered as well. Between the 25th of December and the 6th of January the local authorities allowed slaves to gather to sing and dance in the Market’s Square and the South’s Cube (Cubo del Sur); an emplacement for cannons at the south of Montevideo’s citadel wall. The slaves gathered in each neighbourhood for an indoors ceremony calling each other with drums, that being the origin of the Calls Parade. Additionally, the assembled group in a procession, akin to nowadays comparsas, visited Montevideo’s authorities.

The ceremonies and processions were the only way they had to keep their traditions and culture alive amidst the reigning European population (“El Candombe de 1800”, Oscar D. Montaño, Portal Candombe, February 22 2011). By the end of the century candombe wasn’t a ceremony anymore. What remained was a dance were the dancers organized in a circle alternating men and women in no particular order; the dancers didn’t have partners. No rules were followed because the only requirement was the singing between the stick holder and the circle of dancers. In the beginning, candombe wasn’t public, only relatives or close people were allowed. The dance would be interrupted in the presence of a stranger and substituted by meaningless dances and songs (“El Candombe de fines de siglo XIX”, Oscar D. Montaño, Portal Candombe, February 22 2011).

In the twentieth century candombe evolved to become as public and Uruguayan as drinking mate. What once was the repressed culture of the African slaves became a culture in itself that identifies the whole country and has spread beyond the humble borders of Uruguay. All along the carnival season, whether in the Carnival Competition or the parades, in theatres or in the street, candombe can be breathed in the Uruguayan air. Parades were organized in addition to an Official Carnival Competition. Carnival groups are now akin to theatre companies, trying to get hold of the best singers, dancers and comedians each year. The sophistication has reached the make-up, clothes and props used in the shows while the lyricists innovate each year with the songs’ messages. Despite the changes, Carnival is still a tradition with deep African roots perfectly appreciated in the comparsas.
Source: pablo-rasilla.suite101.com
welcomeuruguay