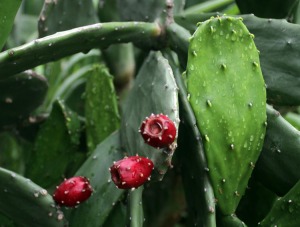 Known in English as the “prickly pear” cactus, this member of the opuntia genus produces the vegetable called Nopal, sometimes referred to as “cactus paddles” in the Southwestern United States. Opuntia, also known as Nopales (from the Nahuatl word nōpalli for the pads) is a large, spiny cactus that bears numerous deep red, juicy-sweet fruits. Prickly pear gets its name from numerous sharp spines borne on the stems. The long, sharp spines (the prickly part of the name) are actually modified leaves that harden as they age. Both have been used extensively in Mesoamerica, particularly by the Aztec and Maya people, since pre-Columbian times.

Early historic observations and archeological data clearly indicate Native Americans relied on prickly pear for food, medicine, and as a source of needles, containers, and water. There are 100 species of Nopal in Mexico, the most famous and economically valuable being the Opuntia ficus-indica species, along with similar members of the Opuntia subgenus.

The fruit begins to ripen in midsummer to a deep red color and produces a very sweet purple-red juice. In southern Texas the most common species of prickly pear is Opuntia engelmannii, which can grow into dense, shrubby clumps covering large tracts of land. In contrast to most types of cactus, prickly pear grows relatively quickly with adequate moisture and spreads easily; broken off stem segments readily take root and create whole plants. The Mexican Nopal has a world-girdling history. In the 16th century sailors introduced it to the Old World, where the Opuntia ficus-indica plant adapted easily to Africa and the Mediterranean basin. It adapted so well that some people thought it was native to the Mediterranean. It’s commercially grown in Sicily and Algeria, and the “sabra” cactus of Israel, regarded as the symbol of the native-born Israeli, is really a Mexican ficus-india nopal. 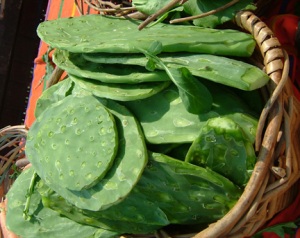 Nopales are very rich in insoluble and especially soluble dietary fiber. They are also rich in vitamins (especially vitamin A, vitamin C, and vitamin K, but also riboflavin and vitamin B6) and minerals (especially magnesium, potassium, and manganese, but also iron and copper). Nopales have a high calcium content, but the nutrient is not biologically available because it is present as calcium oxalate, which is neither highly soluble nor easily absorbed through the intestinal wall. Addition of nopales also reduces the glycemic effect of a mixed meal. Nopales are low carbohydrate and may help in the treatment of diabetes.

The Opuntia ficus-indica nopal is a symbol of Mexico. The Mexican flag and coat of arms both feature an eagle, with a serpent in his beak, perched upon a nopal cactus. Nopal has medicinal uses, it has been utilized as a binding and waterproofing agent in the production of adobe, and it is a host for cochineal insects that produce dyes, food coloring and cosmetics.

The nemesis of the Nopal, the Nopal moth, Cactoblastis cactorum, also known as the “cactus moth,” is native to southern South America. The larvae stage of this insect devours the inside of the cactus. In the 1920s the moth was taken to Australia to control the nopal, which had been previously introduced and had gotten out of hand. The nopal moth did its job Down Under, greatly reducing the presence of nopal in Australia. 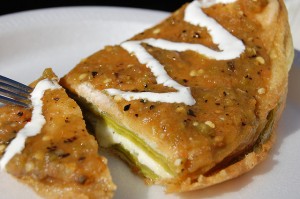 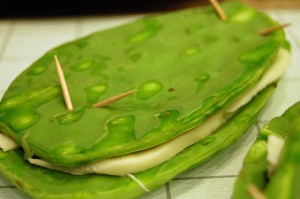 Preparation
Clean and boil the select nopales for thirty minutes. Pair similar sizes preferably small.
Place thin slices of cheese , onion and green chili on one nopal and cover with a second one, basically making a sandwich. Secure the nopales with toothpicks. Beat egg whites until they form stiff peaks; gradually beat in salt and yolks. Heat the oil in a large skillet until a few drops of water sprinkled into it bounce around. Dip the stuffed nopales in the egg batter to coat. Fry in the hot oil until golden brown on each side. Drain on paper towels. Top with Salsa of choice, optional Crema and serve. 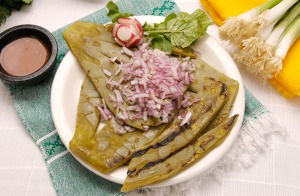 Instructions
Prepare grill for direct-heat cooking over medium-hot charcoal (medium heat for gas)
Meanwhile, hold each cactus paddle by the stem with a kitchen towel and scrape off any thorns with a sharp knife. Rinse and dry paddles. Brush paddles with oil and grill in 2 batches, covered only if using a gas grill, turning occasionally, until softened and lightly charred, 3 to 6 minutes. Trim off about 1 inch of hard stems from 8 paddles, then cut paddles crosswise into 1/4-inch-wide strips and season with salt (preferably coarse). Make 5 lengthwise cuts in each whole paddle, almost to stem, so paddles resemble “hands.”