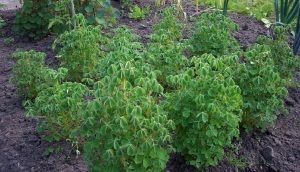 The original species was Oxalis Acetosella Linnæus, widely distributed in the northern hemisphere, and called wood sorrel because it thrives in forests. Like many species it bears three leaflets, and thus is called a shamrock. Most species are perennial herbs, though some are annual, and others subshrubs. Oca is sometimes referred to as one of the “lost crops of the Incas,” because, despite its potential to become a globally cultivated crop, it’s still mostly enjoyed only in a few limited areas, namely South America and Mexico. Thought to be one of the oldest crops of the Andean region (tubers were even found in early tombs in the area), the oca suffers unfairly from the stigma of a “poverty food,” yet supplies a rich source of carbohydrates, calcium and iron (some high-protein varieties even contain more than 9 percent protein), not to mention great taste and versatility.

The stem tubers of Oca form in the ground in the autumn. These are commonly boiled before eating although they can also be eaten raw. The leaves and young shoots can be eaten as a green vegetable. Introduced to Europe in 1830 as a competitor to the potato and to New Zealand as early as 1860, it has become popular in that country under the name New Zealand yam and is now a common table vegetable. It is also widely known in the Polynesian Islands of the South Pacific under the name yam. In the United States, however, Oca is widely ignored, but growing in popularity among specialty shops and Latin markets. Today, many people are finding it fun and challenging to grow these vegetables themselves. You can have first hand access to an amazing collection of healthy and delicious vegetables all year round while brightening your green thumb, all in your very own backyard. Oca tubers are as easy to grow as spuds, and in their native Andes the translucent, pinkish-red tubers are used in just the same way, tasting like potatoes but with a pleasant lemony tang. What’s more, with its clover-like leaves and buttery orange flowers, this lovely plant is attractive enough to use in your flower borders. This is one of my favorite confinement dishes. The easiest and no need to think so much, the Roasted Red Oca Potato… Oh my so yummy! 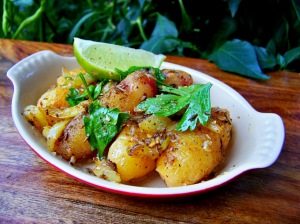 Instructions
Scrub and trim the ends from a dozen similarly-sized variously-colored oca and plunge into a pot of rapidly-boiling mineral water (substitute plain, filtered water) along with a good pinch of sea salt.  Allow the tubers to cook until almost, but not quite tender, about 10 minutes.  Drain Oca and allow cooling. Meanwhile, heat oil in a heavy skillet over medium heat and sauté cumin seeds until fragrant and lightly toasted.  Add butter and potatoes and cook, turning often until slightly crisp and browned, about 7 minutes. Add garlic, shallots, grilling pepper and Aji Amarillo and cook until peppers are soft, about two minutes.  Remove pan from heat and add torn cilantro.  Season with salt and pepper, toss and serve hot with a wedge of fresh lime on the side. Pretty simple and delicious!